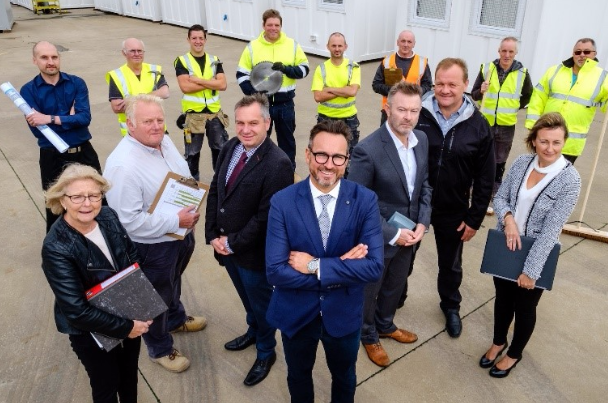 Integra Buildings has announced new expansion plans and its largest contract to date as it celebrates its 20th anniversary.

The modular building specialist has secured planning permission for a new two-storey modular office block at its Paull operation site in East Yorkshire to showcase its materials and designs to its clients.

The new offices will include dedicated training areas, a business lounge and meeting rooms for clients and suppliers.

The site will also include two new bespoke manufacturing facilities that will double capacity.

The new facility is scheduled for completion in April 2018, after which Integra will vacate its nearby Burstwick site.

Integra initially purchased six acres at the new site for £1.6m and will make a further £1.4m investment in the facilities.

As a result of the expansion, Integra will expand and relaunch its training and apprenticeship programmes.

Gary Parker, managing director at Integra, said: “We started small, but we believed in the business and the industry and we had a passion to be successful.

“A key to our success has been always keeping strong cash reserves in the business.

“That has given us control of our own destiny.

“We’ve been cautious with our money, but ambitious for the business.

“Our financial stability has given us the capacity to seize opportunities to grow and also given clients confidence to trust us with ever larger projects.”

Integra has also announced that it has won a raft of new contracts, including its largest one yet.

The modular specialist has secured a £4.6m project for sports changing facilities at multiple sites, as well as a £3.3m scheme for a new primary school in the South East.

The company is also in the process of completing a £1.6m scheme for a classroom extension and new teaching block in Leeds.

In addition, it has secured approved and favoured contractor status on six frameworks with local government and public sector organisations across the UK.