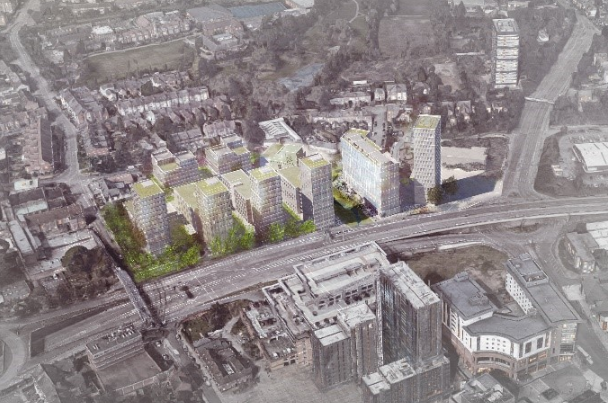 The regeneration specialist company revealed plans that could deliver more than 700 new homes on land off Abbotts Lane in Coventry.

CDP purchased the 5.5-acre site from National Grid 12 months ago and is currently working with Coventry City Council on proposals which are expected to be submitted for planning approval in the summer.

The proposals were launched at MIPIM, Cannes, to attract UK and international investor partners to help deliver the scheme.

The project is one of several major announcements being promoted by the Coventry and Warwickshire MIPIM partnership, which is made up of more than 20 companies and organisations who fund the area’s presence at the four-day event.

Ian Harrabin of CDP said the development would not only provide much-needed housing for Coventry residents, but would also expand the benefits of the city centre out to the surrounding community.

“This is a very large site and provides an opportunity to develop a new district outside the collar of the ring road,” said Ian.

“Coventry city centre is really on the up, but the ring road remains a barrier for local community access.

“Most other major city centres in the UK have seen a renaissance led by new urban communities, which have revitalised shops and restaurants and brought in more offices.

“That is the next step for Coventry, where new housing developments for people who can walk to work will balance the recent surge of new student developments.”

Ian added that the continued improvements by the council to the public realm were making the city centre a much more attractive place to live.

He continued: “The former industrial site is currently derelict, but perfect for an environmentally sustainable development which cuts down on car use.

“The Radford Brook runs through the site in a culvert, but can be easily opened up as a landscape feature.

“The brook could be a direct green link connecting Belgrade Plaza to Naul’s Mill Park, Bablake School and the Coundon and Radford communities.”

The view from Radford Brook

Cllr Jim O’Boyle, cabinet member for jobs and regeneration at Coventry Council, added: “This is the largest site that we have designated for housing close to the city centre and the council welcomes proposals to bring forward a high-quality project.

“The city needs many more housing units and I’m also very interested in the wider community benefits of a linear park improving access to the city centre for local residents.

“We look forward to working in partnership to get the project delivered.”