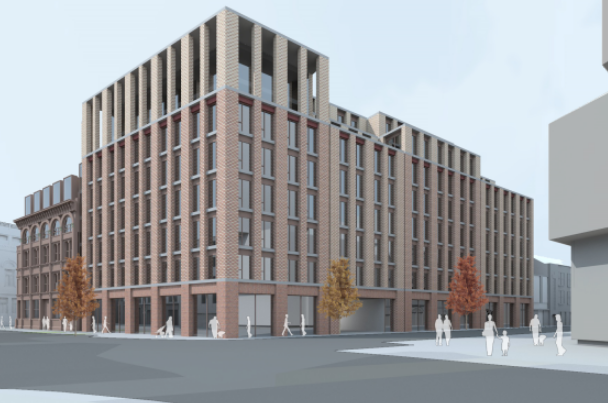 Belfast City Council has announced plans for the £75m redevelopment of the former Belfast Telegraph building.

The city centre scheme will become a state-of-the-art workspace known as ‘The Sixth’ and include 230,000 sq ft of commercial space and ‘active’ ground-floor uses such as cafes, restaurants and retail.

The redevelopment has been designed by architectural practice Allford Hall Monaghan Morris (AHMM).

The announcement comes as a proposal of application notice for the scheme was submitted by Bel Tel LLP – the site owners – which acquired the site in late 2016.

This is the first joint venture by Belfast City Council with a private developer, McAleer and Rushe.

“These are important proposals that will bring a landmark building associated with the news industry back into use for a digital age,” said Stephen Surphlis, property director at McAleer and Rushe, on behalf of Bel Tel LLP.

“Adjacent to both the Ulster University Campus and Central Library, The Sixth will play an important role in the regeneration of Belfast by delivering high-quality workspace for global and local businesses, particularly those in the professional, creative and technology sectors."

Built in 1886, the Belfast Telegraph building was home to the newspaper for over 100 years before it moved premises in June 2016.

The plans for the redevelopment were showcased to international investors, developers and occupiers at MIPIM in Cannes.

Councillor Mairead O’Donnell, chair of Belfast City Council’s city growth and regeneration committee, said this was an exciting milestone for the scheme.

"The partnership’s proposals will help to re-energise this area with a scheme that has been designed to respect the existing built heritage in this part of the city, and The Sixth will build on the momentum already generated by the Ulster University investment.”

A planning application for the scheme will be submitted following a 12-week, pre-application community consultation led by national planning consultants Turley.

The consultation will provide local residents, businesses and other members of the public with an opportunity to see and to comment on the plans.