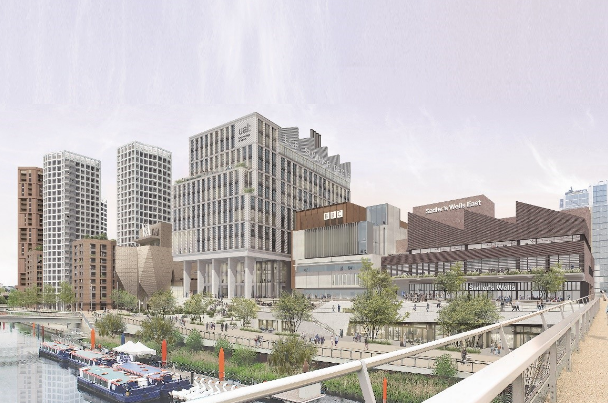 Sadiq Khan has outlined his £1.1bn vision for East Bank at Queen Elizabeth Olympic Park and welcomed a £151m contribution secured by the government.

The mayor of London unveiled new plans and building designs for Sadler’s Wells, London College of Fashion (part of University of the Arts London) and the V&A, which includes a partnership with the Smithsonian Institution, across Stratford Waterfront.

The mayor also revealed that the BBC will join the list of institutions in the area to create a new home for the BBC Symphony Orchestra & Chorus and BBC Singers, as well as a significant presence from the BBC Concert Orchestra in addition to state-of-the-art recording facilities to host recording sessions and live performances.

Khan also announced that at least 50% of new homes across the remaining development sites on the park – Stratford Waterfront, Pudding Mill and Rick Roberts Way – will be affordable.

He stated that great cities were defined by their ambition as much as their achievements and that East Bank was the most ambitious new project of its kind for decades.

“I have made culture, innovation and growth a top priority, and as London’s centre of gravity extends east, I’m delighted that we’re placing culture and education at the heart of this development and the Olympic legacy.”