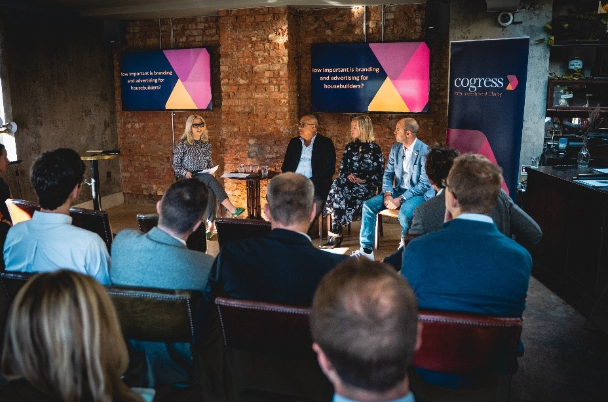 Putting marketing spend in your business plan will help you to secure funding, according to Nicole Bremner, founder of East Eight (pictured above, second right), at a recent panel discussion in London.

The Cogress-hosted event discussed how to maximise development marketing strategy.

When asked whether including marketing spend in a developer’s business plan helped or hindered them getting funding, Nicole explained that it helped.

Tal said it looked at the marketing budget in a proposal “right at the beginning”.

“…We always want to know about how the developer is planning to exit,” he added.

Tal explained it would look at when the developer would start their marketing, how much they would spend and whether or not it was going to be sold off plan or after completion.

“We are facing bad times right now,” he said, “but you know, even before, marketing was always the most important part of the game.”

When asked at what point the cost of branding and marketing ever outweighed the benefit, Nicole divulged that some of the fees that some marketers charged could be in the tens of thousands of pounds for a scheme as small as eight units.

“…That’s fine if you are branding a massive, big development,” she explained, “but it’s not going to work for me.”

Jamie added that it depended on a developer’s scheme.

“No SME, that I know of, will be paying a branding agency because they just can’t afford it.

“It would remove a huge amount [from] their profits.”